I just got back from a roughly week-long trip to England – first to London for a few days, then to York. Each had a few specific elements I plan to touch on in more depth, but I think I’d be remiss in my duties as your transcontinental tour guide if I didn’t start off with an overall scoop. SO: London.

First off, I stayed with a friend. If you can’t either 1) drop a LOT of money on your own place or 2) share a room, London may not be for you. It’s not New York expensive to stay there, but it’s expensive. (On that note, many thanks to Marion for the freebie. I honestly might not have been willing to go if I had to pay for it.)

Marion met me at Euston Station to show me the way to her flat. En route she told me, “I love London; it’s a lot like New York, but cleaner and quieter.” At first I didn’t totally see it, but by the end of my trip I can absolutely confirm. London has tons of cool attractions – old buildings, excellent museums, plenty of beautiful parks – but if you’re traveling to get an experience with a different tone, I think this is worth knowing in advance. London is busy and full of people, modern, tons of shopping, tons of tourists, kind of a “Go. Go. GO!” vibe. If that’s something that’s a big change of pace for you, or something normal that you just really enjoy, London will suit you.

This was part of an area that equates, as far as I can tell, very roughly with the East Village in NYC – slightly less crowded and more artsy than in the shopping districts.

The areas next to parks are usually a little less crowded than the shopping centers (who knew).

I think the big thing that defined London as different was, for me, not the slightly thinner crowds or the somewhat reduced volume, but the parks. NYC (or at least Manhattan; let me not speak for the other boroughs, since I could count my visits to them on my fingers) has got a lot of very small parks, some mid-sized ones, and of course Central Park, its singular, iconic giant. London has several enormous parks, all in easy walking distance of each other. You can easily spend a whole day just hanging around a London park, occasionally grabbing a coffee or cookie, exploring new paths or even taking a paddle boat in the Serpentine.

You’ll note that two of those photos include ornamental sculptures. That’s something I’ve noticed about parks all over the UK, and think is pretty baller – like, some of them are grand destinations in and of themselves, but some of them are just little treasures, waiting to be discovered, you know? There weren’t any websites lying around telling me to go to a park and find a sculpture of a girl and a giant cat hanging out. Why would they? Why is this even here? It seems to genuinely just be that these societies want to beautify their parks and support their artists. I love it.

Another excellent thing about the parks of London, specifically, is that many of the best historic and museum destinations are housed among or very near to them. This means that with some planning, you can set your furthest destination for the day and then walk back towards home base, occasionally hitting up a museum or famous statue or building, winding away most of your walk in a beautiful open green. (I limited myself to visiting free museums, too, so I bet you can plan an even fuller day or more convenient walk if you’re open to dropping a few quid.) I can’t imagine this gives you the most genuine feeling of what London is like as a place to live, but it’s pleasant, mild, and scenic, as well as making for a wonderful tonic to the hustle and bustle of the city if you’re someone like me who can’t take all that energy for too long.

If you do like the busier parts of a town, I have to say it’s well worth waiting until the holiday season to drop in. Christmas is a  B I G   D E A L  in Britain, much more visibly celebrated than in the US. And I don’t mean just in a super capitalist terrible way, which Americans are no stranger to – there is genuine celebration going on. Cities send up fun fairs and wild, wonderful decorations. Even in the storefronts, which you expect to be seasonal to bring you in, people seem to have fun with what they’re doing. It really gives you a sense of Christmas being a genuinely magical time of the year. I absolutely adored it.

I’m sure London is very nice in the summer, too – the parks must be even lovelier, and I’m sure the zoo (which I did see) and the botanic gardens (which I did not) have a bit more going on. Still, visiting when it’s decked out for the holidays really brought a bit of magic to it. (Looking for a bit of a cheat? I went in mid/late November. The holiday decorations and Hyde Park Winter Wonderland were already set up, but it was still pretty mild outside.)

The one thing I have to admit I was underwhelmed with was the various iconic landmarks. The long and the short of it is that I don’t think they’re for me. I did get some nice shots, for sure:

Obligatory Buckingham Palace photo. I really should have gone during the changing of the guard. 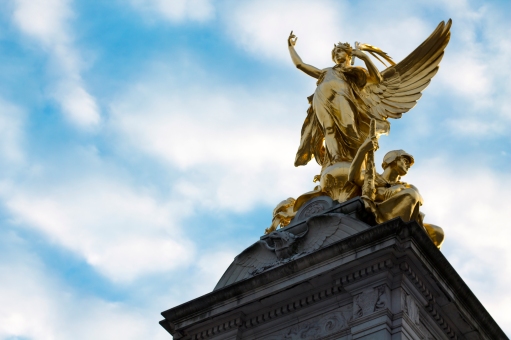 There’s an enormous stature opposite Buckingham Palace, too big for me to capture with my camera from any decent vantage point. This angel is at the very top.

Kensington Palace interior, upstairs. The inside is huge, but feels very segmented.

These were cool, don’t get me wrong – grand, historic, beautifully kept. I guess I have a hard time getting a real kick out of them because with so many landmarks, I’ve already seen them at their peak condition through the internet. There are hundreds of photos of most world-famous landmarks on beautiful days, from the perfect angle, at some point when crowds weren’t allowed in, taken with gear so good that it’s clearer than the real thing can be with the naked eye. 98% of the time, the real thing is great, but doesn’t quite live up to the expectation – and if all you can do is look at it, that can be a genuine disappointment.

Personally, I get a lot more out of the statues and sculptures around London. My biggest example: I had no idea there was a statue right in front of Buckingham Palace! The Victoria Memorial faces the palace and was honestly a lot more awe-inspiring. I stood under it and it towered over me, more than my eyes (or my camera) could take in in a single glance. Every angle presented some new detail to take in – it’s a work of art meant to be seen up close and lovingly examined. I spent a lot more time checking out the memorial than the palace itself. There was a ton to unpack in just one memorial. 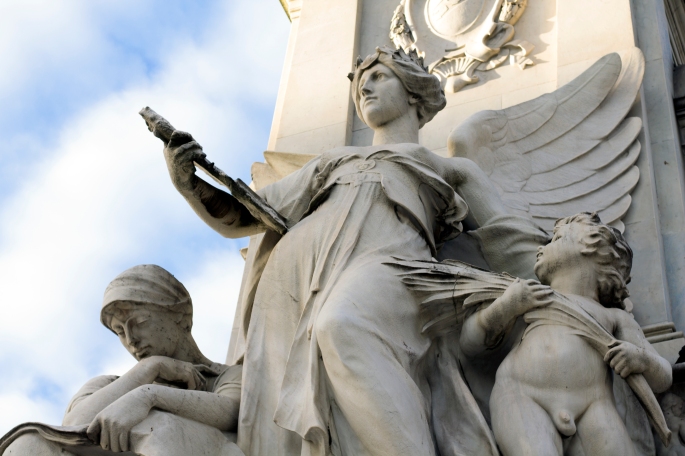 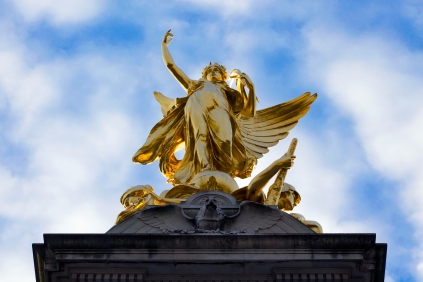 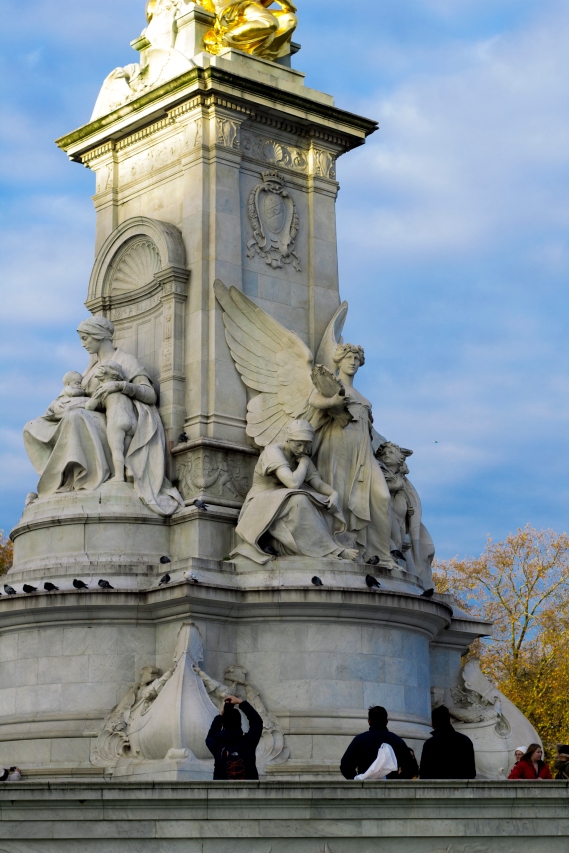 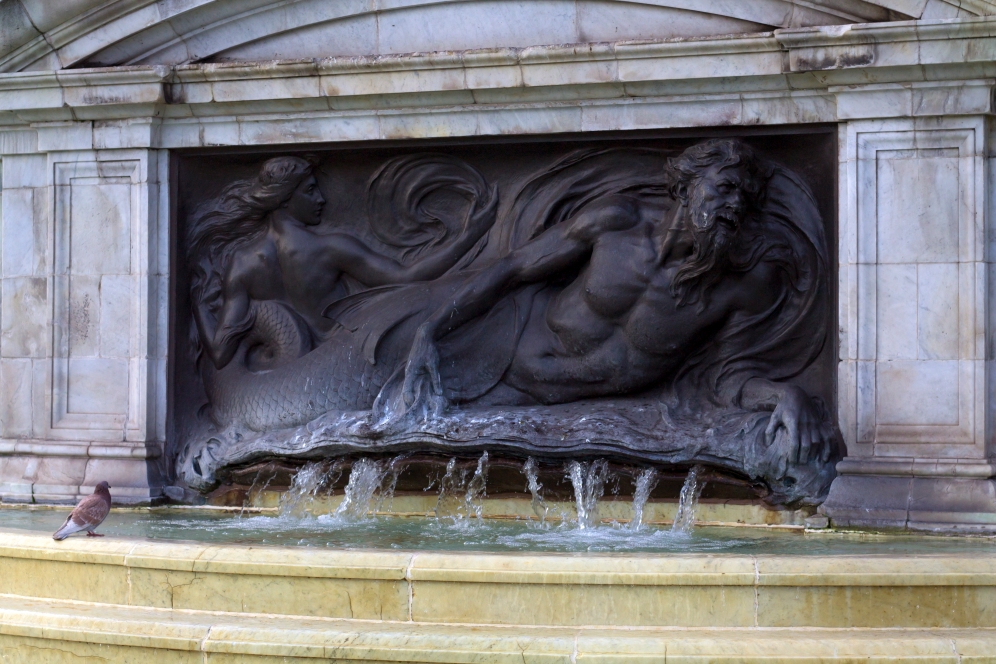 The thing I didn’t explore and wish I could report on is the bar scene/nightlife. It’s just a lot of money to go to a bar, and my default assumption is that in a city, every bar will be too damn crowded (especially since I was in London over the weekend!). If I’m there again in my travels, I’ll try to check back and report.

I’m planning on separate posts for the London Zoo, the museums (with a special focus on my favorite, the Wellcome Collection), and maybe the parks, so keep on the lookout for more from London!

2 thoughts on “Impressions of London”

View all posts by rooftoprollerrink